Gavri – The Broadway of Tribal Mewar

Life, in short, is an adventure. A constant cycle of struggles and accomplishments. My struggle had always been between my career and passion. After animation as a career choice, my passion for photography, or rather, our passion for photography became a full fledged career choice. No doubts about it, we have enjoyed every moment of our journey from the untamed roads, to the sky-high views, the solitary corners of our four walls to the swarming city lights.
In between the grocery lists, juggling chores and unread emails, a phone call landed us at Udaipur for a photo shoot. Also my hometown, this city never ceases to please. A little birdie told us about the festival called Gavri that had commenced in parts of Mewar in Rajasthan and would be performed in a nearby village from Udaipur. Finishing up the shoot, we geared up, all excited, to cover the dance-drama festival of the Bheel Tribe. 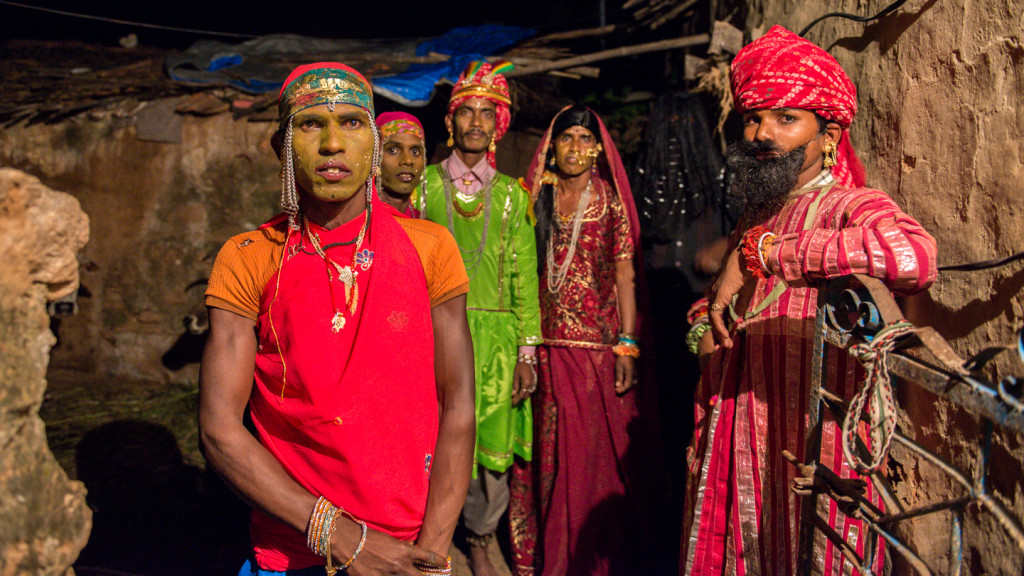 ‘GAVRI’ is a local lingo for Gauri- wife of Lord Shiva. The 40 days long Gavri is a transcending religious festival of Bheels which is an epitome of their cultural beliefs, social solidarity and spiritual pursuits. They consider Gavri as a catalyst to seek Lord’s blessings for the well being of their lives – of the tribe and the entire village. Based on a mythological legend, the Bheels, young and old alike form a group ranging from 30-200 people and perform in the villages with whom they have affinal ties, business or ritual exchanges. 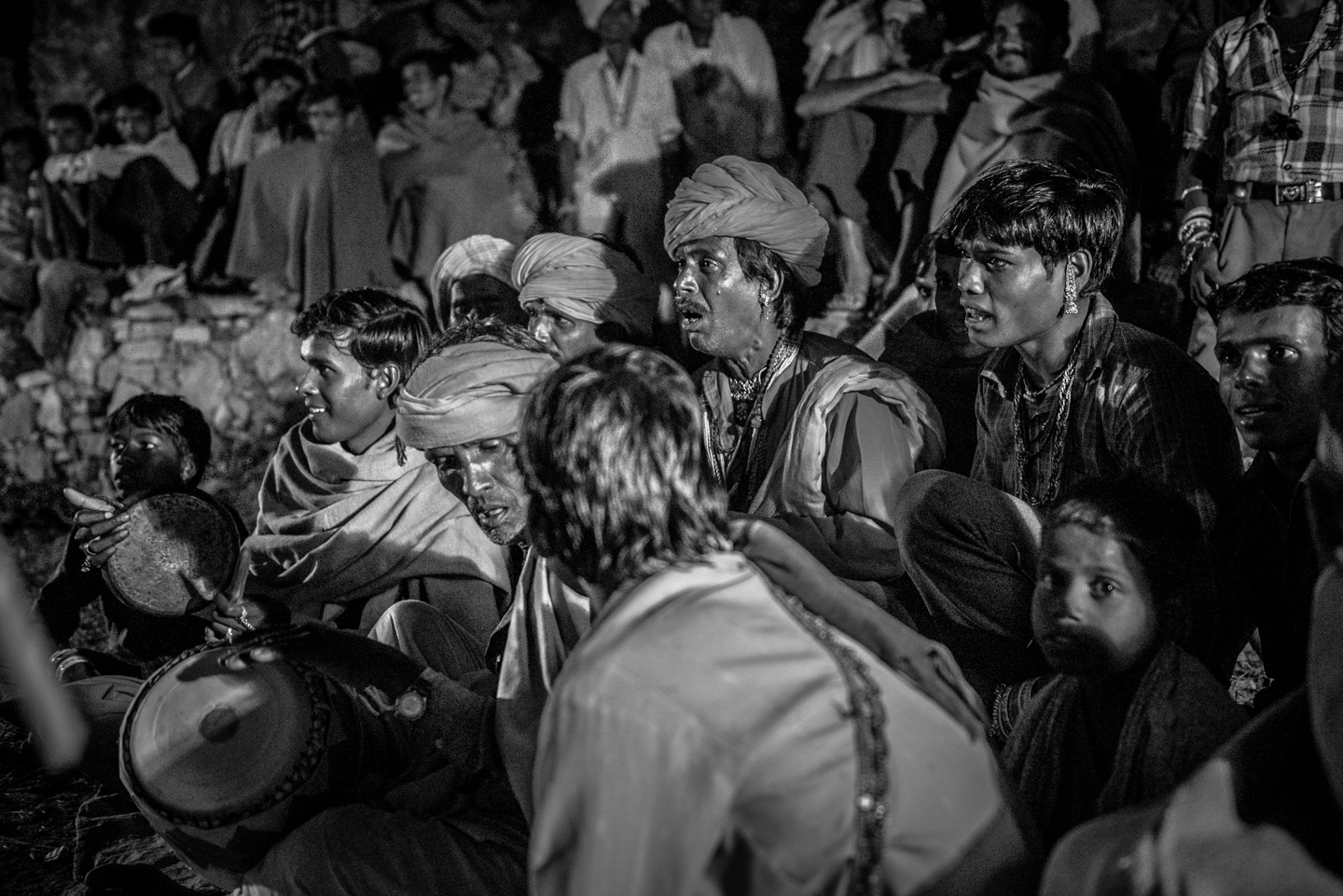 Engrossed in travel books, local guides and Google, we were simply running in circles. One thing led to another and we finally met ‘Lehru’, a mason, who turned out to be our ‘jackpot’. He held the itinerary of the entire Gavri festival and showed us a trailer of what is stored in for us. ‘Mata ka Kheda’, a village nearly 30 minutes from Udaipur was where we would find our Toli. With all the necessary information, we called our partners in crime Paritosh-Manisha, our localite cousins and began our journey on the road less traveled. We started a bit late from Udaipur and quite unexpected, narrow, dark, unpaved roads welcomed us. Our skeptic minds almost made us turn our wheels back home, but the inner inquisitive child won over. Once we reached our destination, it was all worth it!

The dingy alley opened to a huge courtyard which was echoing with the tribal tunes and verses sung in high tone. The act was vacillating between spiritual musing and performance galore. The brightly lit chowk was a perfect set with an expansive banyan tree and a small temple adjacent. Compared to the usual commercial acts being performed in the cities, this was far too vivid in terms of costumes, jewelry, characters and props. Needless to say, the whole set up was absolutely raw, but the unparalleled energy diffused that exception. 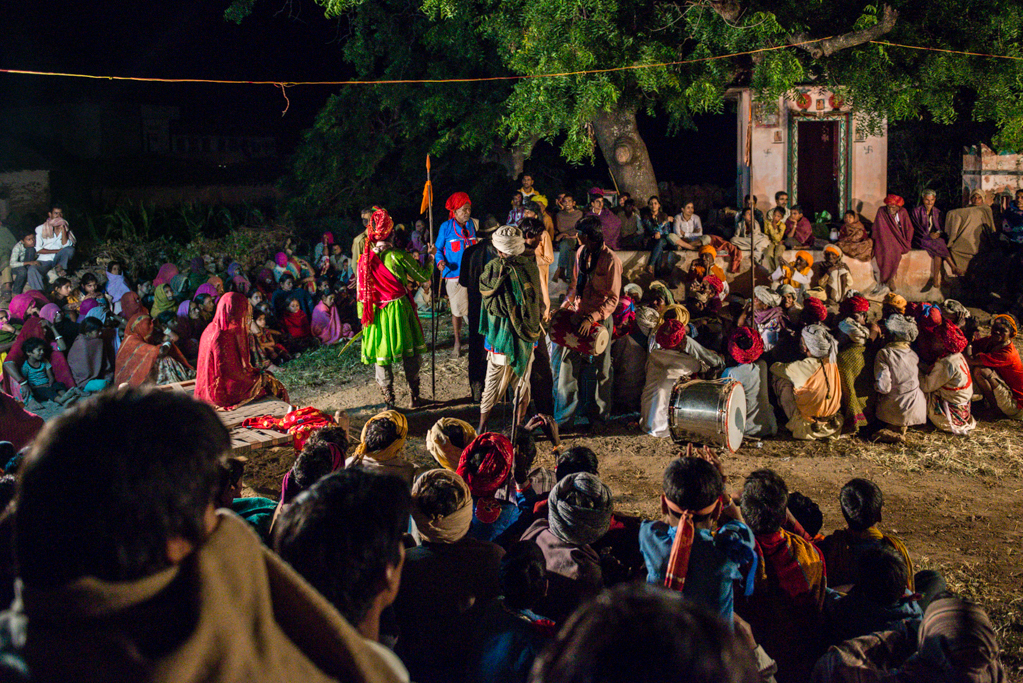 Intrigued by the entire set up we approached Lehru to get a better insight of Gavri. The main festival of Gavri is propagated by the Bhopas (priests) of the village by placing the trident and the deity in the middle of the village area. The first day of the fest is organised in the main temples in the presence of the Bhopas and chieftains of the village. On the second day, the act is played in the north part of the village and from the third day onward, the performers travel to the inviting villages. 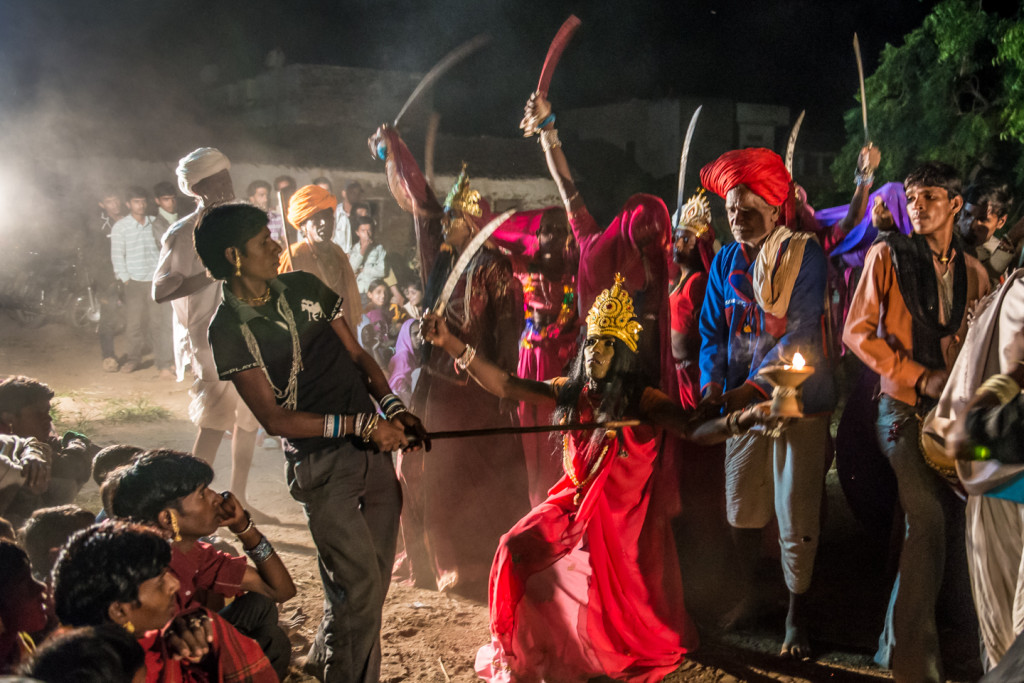 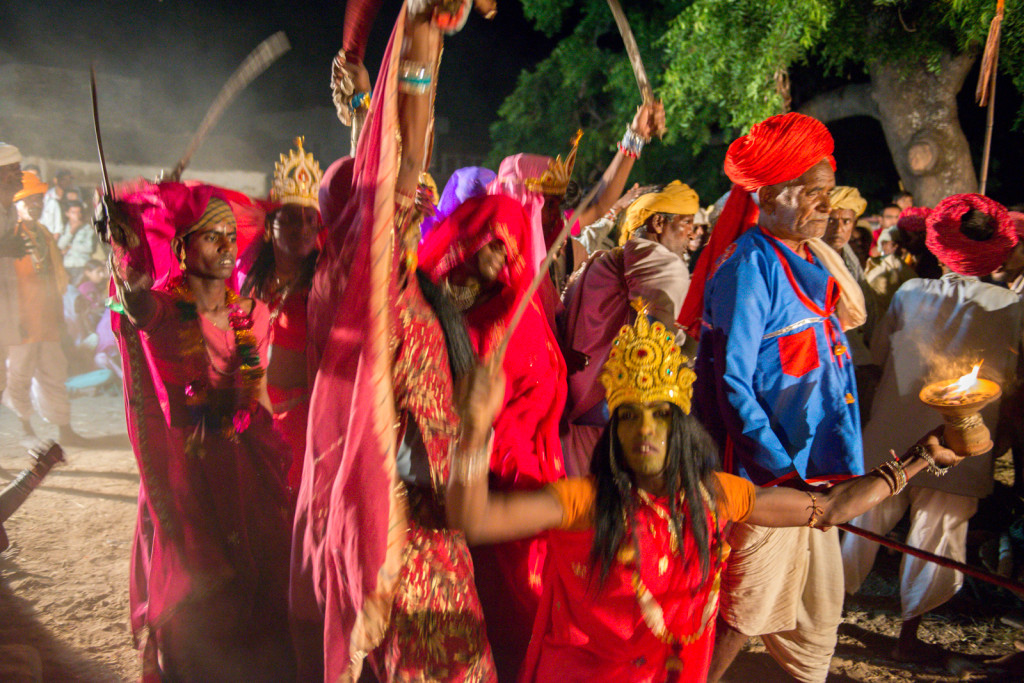 Extending over 4-5 hours a day with just 1 break, the main act is called Gavri and other unrelated Bheel acts are being performed. Ironically, none of the women members of the tribe participates. All men disguise themselves in various characters including (Deva -Gods) Shiva, Parvati, Kanha and Kalka etc. The lead actors usually are the lead singers too for the respective acts. The portrayal of demons (Danava), humans (Manava) and animals (Pashu) are also involved. It is an act of devotion and gratitude. All the actors abstain from alcohol and physical intimacy for the period of 40 days and consume only vegetarian food once a day. The troupe travels around the Mewar region, by the villagers that invite them over and bear all their expenses of food and lodging. 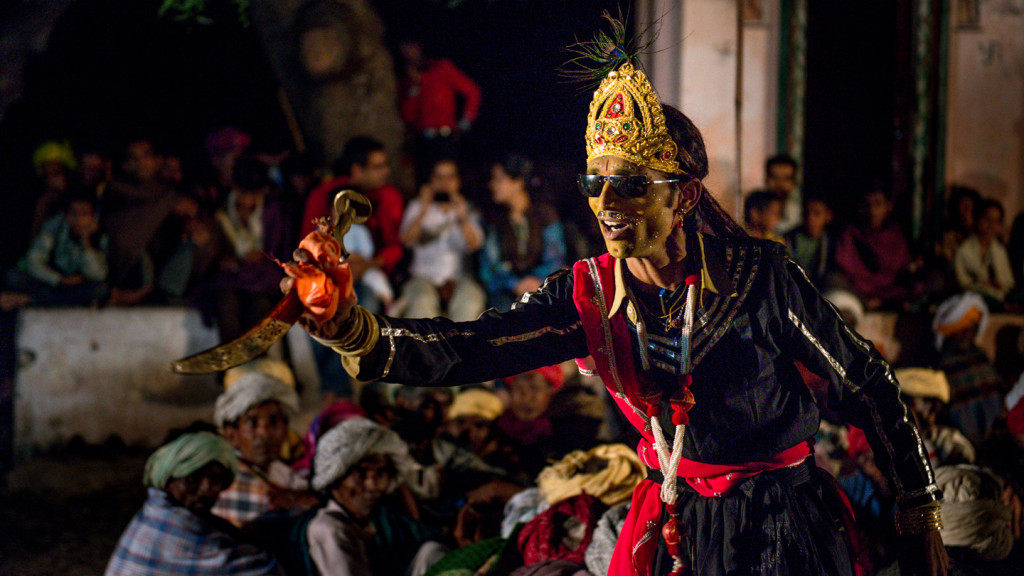 The ambiance created by these reformed artists in that remote village ceased to be pseudo. It had a rural charm, infused with the fervor of raw performers and a spiritual culture. Lehru narrated an incident that occurred during his last visit to see Gavri. He mentioned how the performances make the entire audience feel the presence of Goddess Gauri among them that it culminates in songs and verses being sung in high tempo. 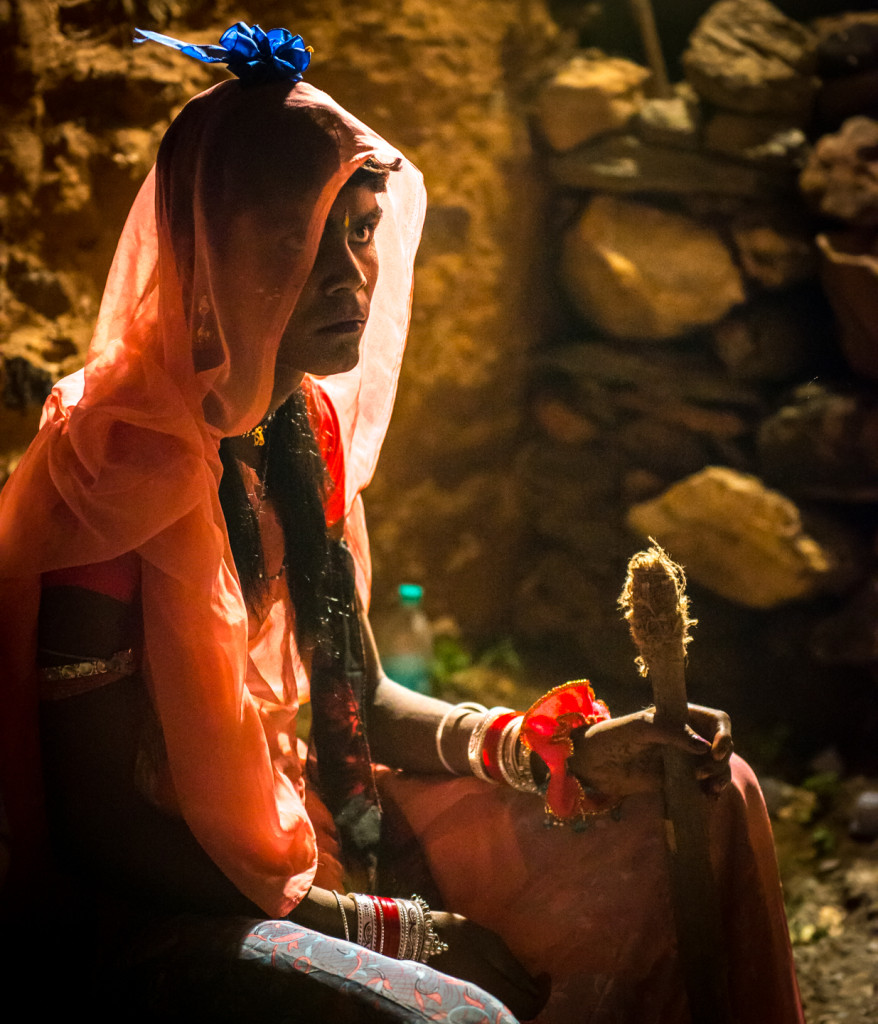 With a little shudder we engrossed ourselves in the visual pleasures. In fact, the time we spent midst the rural lot helped us discover the true essence of the entire festival. The Bheels believe they have been blessed by Lord Shiva hence, the reason they outperform Gavri, better than anybody else. It is their responsibility to carry forward the cultural effervescence to the coming generations and maintain the element of entertainment.

Aesthetically pleased and filled with a transitional state of trance, we left the village at around 3 o’clock in the morning. But what didn’t leave us were the reverberation of thali and dhol and the chants of ‘Jai Shanker Mahadev’  and ‘Jai Gauri Mai’ echoing in our souls, that even today lead us to the state of bliss. 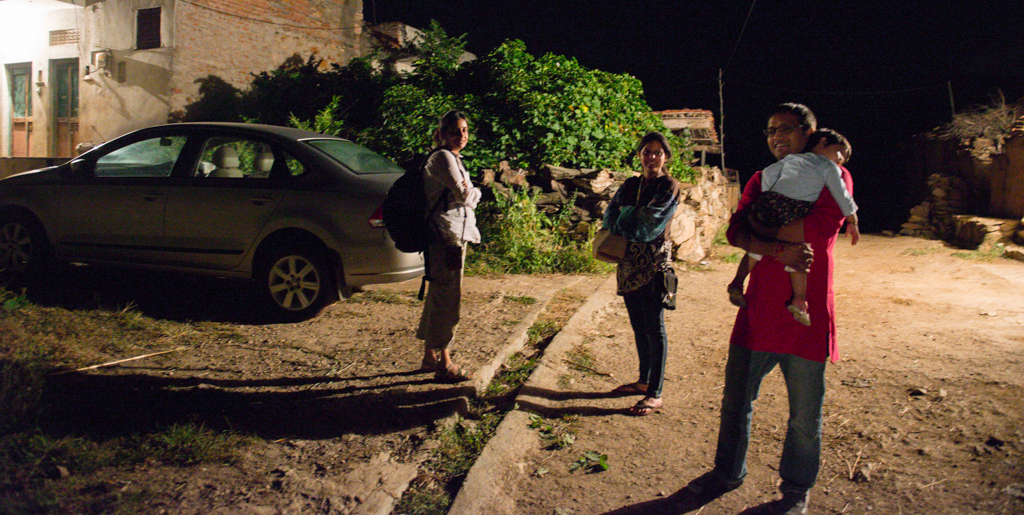 4 Comments for Gavri – The Broadway of Tribal Mewar

Awesome blog! Is your theme custom made or did you download
it from somewhere? A theme like yours with a few simple tweeks would really make my blog jump out.
Please let me know where you got your design. With thanks

A festival of a distant village, captured in stunning visuals and blended perfectly with text laced with in-person experience. It was a joy and a gala treat to enjoy the devotional fest through your pictures, keep up the good work. Loved each frame since all of them are word a thousand words.

I’m really enjoying the design and layout of your site. It’s a very easy on the eyes which makes it much more enjoyable for me to come here and visit more often. Did you hire out a designer to create your theme? Expcationel work!

All Images and Content © Copyright 2016 Sachin Saxena. All Rights Reserved.